Random is barely random at all?

I did this to test the randomness of randint:

I tried about 10 times more and the best result I got was 121 iterations before a repeater. Is this the best sort of result you can get from the standard library?

The Birthday Paradox, or why PRNGs produce duplicates more often than you might think.

There are a couple of issues at play in the OP's problem. One is the birthday paradox as mentioned above and the second is the nature of what you are generating, which does not inherently guarantee that a given number will not be repeated.

The Birthday Paradox applies where given value can occur more than once during the period of the generator - and therefore duplicates can happen within a sample of values. The effect of the Birthday Paradox is that the real likelihood of getting such duplicates is quite significant and the average period between them is smaller than one might otherwise have thought. This dissonance between the perceived and actual probabilities makes the Birthday Paradox a good example of a cognitive bias, where a naive intuitive estimate is likely to be wildly wrong.

The first part of your problem is that you are taking the exposed value of a random number generator and converting it to a much smaller number, so the space of possible values is reduced. Although some pseudo-random number generators do not repeat values during their period this transformation changes the domain to a much smaller one. The smaller domain invalidates the 'no repeats' condition so you can expect a significant likelihood of repeats.

Some algorithms, such as the linear congruential PRNG (A'=AX|M) do guarantee uniqueness for the entire period. In an LCG the generated value contains the entire state of the accumulator and no additional state is held. The generator is deterministic and cannot repeat a number within the period - any given accumulator value can imply only one possible successive value. Therefore, each value can only occur once within the period of the generator. However, the period of such a PRNG is relatively small - about 2^30 for typical implementations of the LCG algorithm - and cannot possibly be larger than the number of distinct values.

Not all PRNG algorithms share this characteristic; some can repeat a given value within the period. In the OP's problem, the Mersenne Twister algorithm (used in Python's random module) has a very long period - much greater than 2^32. Unlike a Linear Congruential PRNG, the result is not purely a function of the previous output value as the accumulator contains additional state. With 32-bit integer output and a period of ~2^19937, it cannot possibly provide a such a guarantee.

The Mersenne Twister is a popular algorithm for PRNGs because it has good statistical and geometric properties and a very long period - desirable characteristics for a PRNG used on simulation models.

The 32-bit integer produced by an MT19337 PRNG cannot possibly represent enough discrete values to avoid repeating during such a large period. In this case, duplicate values are likely to occur and inevitable with a large enough sample.

The Birthday Paradox in a nutshell 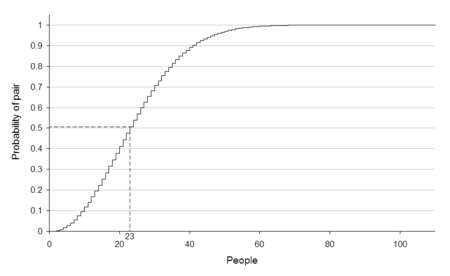 The probability of a match occurring between any two individuals is much higher than the probability of a match to a specific individual as the match does not have to be to a specific date. Rather, you only have to find two individuals that share the same birthday. From this graph (which can be found on the Wikipedia page on the subject), we can see that we only need 23 people in the room for there to be a 50% chance of finding two that match in this way.

From the Wikipedia entry on the subject we can get a nice summary. In the OP's problem, we have 4,500 possible 'birthdays', rather than 365. For a given number of random values generated (equating to 'people') we want to know the probability of any two identical values appearing within the sequence.

For a sequence of 100 numbers, we have

From Calculating the Probability we get an expression of

. The following snippet of Python code below does a naive evaluation of the probability of a matching pair occurring.

This produces a sensible looking result of p=0.669 for a match occurring within 100 numbers sampled from a population of 4500 possible values. (Maybe someone could verify this and post a comment if it's wrong). From this we can see that the lengths of runs between matching numbers observed by the OP seem to be quite reasonable.

Footnote: using shuffling to get a unique sequence of pseudo-random numbers

See this answer below from S. Mark for a means of getting a guaranteed unique set of random numbers. The technique the poster refers to takes an array of numbers (which you supply, so you can make them unique) and shuffles them into a random order. Drawing the numbers in sequence from the shuffled array will give you a sequence of pseudo-random numbers that are guaranteed not to repeat.

Before blaming Python, you should really brush up some probability & statistics theory. Start by reading about the birthday paradox

By the way, the random module in Python uses the Mersenne twister PRNG, which is considered very good, has an enormous period and was extensively tested. So rest assured you're in good hands.

If you don't want repetative one, generate sequential array and use random.shuffle

As an answer to the answer of Nimbuz:

True randomness definitely includes repetition of values before the whole set of possible values is exhausted. It would not be random otherwise, as you would be able to predict for how long a value would not be repeated.

If you ever rolled dice, you surely got 3 sixes in row quite often...

Python's random implementation is actually quite state of the art:

That's not a repeater. A repeater is when you repeat the same sequence. Not just one number.

You are generating 4500 random numbers from a range 500 <= x <= 5000. You then check to see for each number whether it has been generated before. The birthday problem tells us what the probability is for two of those numbers to match given n tries out of a range d.

You can also invert the formula to calculate how many numbers you have to generate until the chance of generating a duplicate is more than 50%. In this case you have a >50% chance of finding a duplicate number after 79 iterations.

To think about it another way:

So by the time you get to 45/4500, that insert has a 1% chance of being a duplicate, and that probability keeps increasing with each subsequent insert.

To create a test that truly tests the abilities of the random function, increase the universe of possible random values (eg: 500-500000) You may, or may not get a dupe. But you'll get far more iterations on average.

For anyone else with this problem, I used uuid.uuid4() and it works like a charm.

There is the birthday paradox. Taking this into account you realize that what you are saying is that finding "764, 3875, 4290, 4378, 764" or something like that is not very random because a number in that sequence repeats. The true way to do it is to compare sequences to each other. I wrote a python script to do this.

Licensed under: CC-BY-SA with attribution
Not affiliated with StackOverflow